The Cinnamon Club is probably the most famous high end Indian restaurant in London.  It’s located in a lovely building and has two bars, one in the Library that is cosy and a more flamboyant one in the basement. 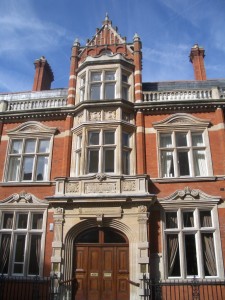 Service was a bit lax initially, but it improved after we ordered. We went for a menu with matching wines, which was not very successful. Benares handles matching wines to Indian cuisine much better. The wines at Benares complimented the flavours of the very subtle Indian food. The Cinnamon Clubs Wine matches were competing too much with the flavour, all of them were really heavy and full bodied. I found the whole experience exhausting.

Some friends who visited The Cinnamon Club a few days before us, had issues with not being allowed to transfer the bar bill to the restaurant bill, which was inconvenient as the bar was busy and they ended up having to wait 15 minutes for it.

The restaurant has 2 AA Rosettes, which sounds about right.