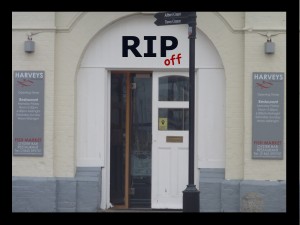 We had a quite a  few comments on our posts covering Harveys in Ramsgate, the consensus being that this celebrity chef inspired outpost was really, really bad.

However unlike the Foliage and Parc des Eaux Vives which also closed this year. Harveys closure was deserved. We can only hope that this prime spot on the harbour does not stay closed for too long.

We have also been cheeky using the tag line “Gone for a Burton” – a play on the celebrity chef John Burton Race’s name.  Isle One got in first with that one, but since they seem to have used one of our photographs without crediting us (tut….tut) it seemed only fair that we copy their tag line.

Harveys has now been replaced by Jacks (The Cantina on the Marina) . I don’t know whether to laugh or cry. Why the council gave the go ahead to deface this building situated in a prime location on a Victorian Harbour is beyond me.  This really is in bad taste and we haven’t even tried the food yet! 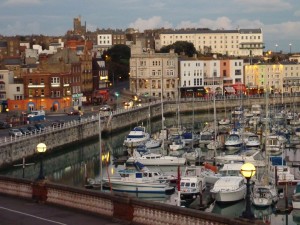 UPDATE May 2011 – The “Orange Blot” that was Jacks is gone, the building now has a new more suitable paint job. Wonder who will move into this prime spot next?  It would be a great location for Eddie Gilberts if they were thinking of expanding.

Harveys of Ramsgate now has an AA Rosette and a change of chef (or so we were told).  We thought we would give it a second chance, and see if our opinion of it differs now from our last rather damming post.

We ordered the fixed price ‘grazing menu’, (which had a very limited fish selection)  2 courses for £12 (this certainly sounded like a bargain),  and a couple of glasses of pretty good wine. We also ordered a portion of their own baked bread which was okay. The starters arrived. Things were looking up as the presentation appeared to be not too bad. My salmon and beetroot with micro greens actually had flavour. Unbalanced but flavour none the less. My companion went for the butternut squash risotto. It also looked good but turned out to be completely lacking in flavour, basically just stodge ….oh dear as we were ready to amend our opinion and eat humble pie. 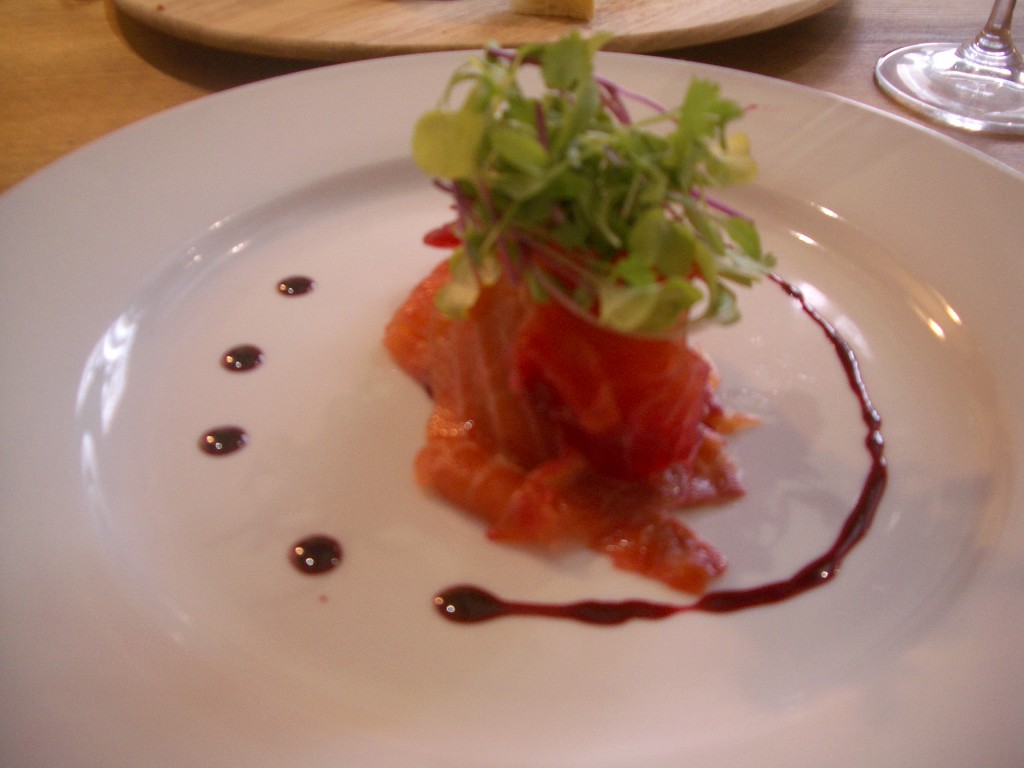 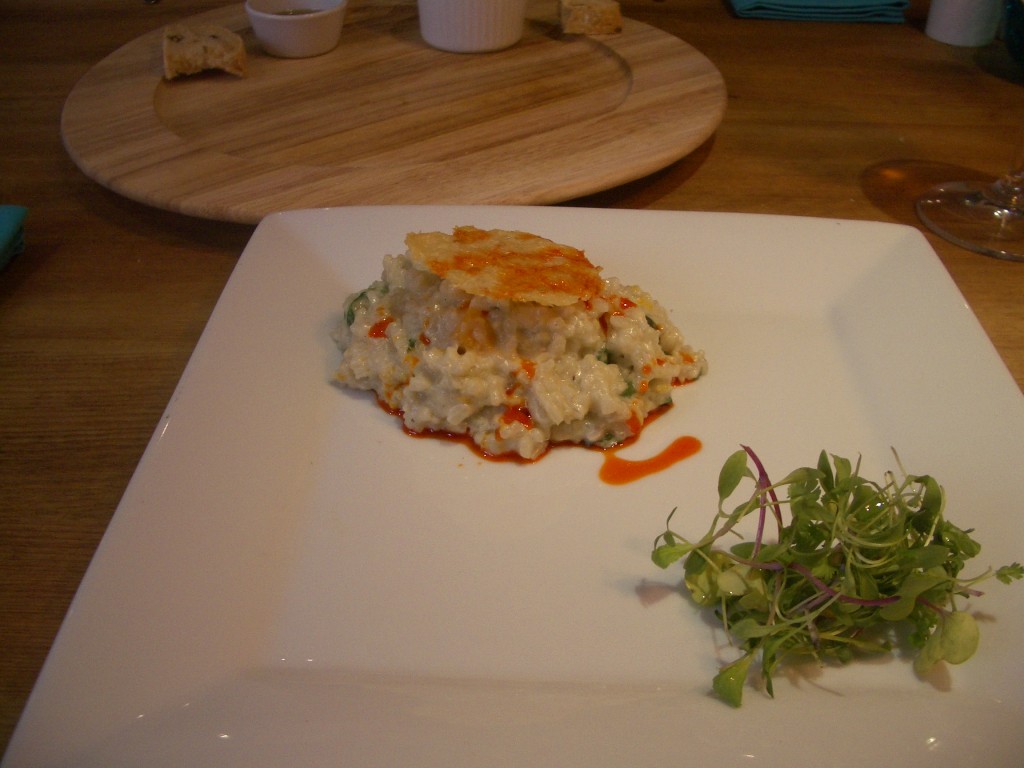 My main course arrived. Apparently this was a ‘belly of pork’. Well it was like no cut of meat I had ever seen. It looked more like a cross section of spinal column (more cartilage than belly!). Only one word came to mind during this course and that I’m afraid was ‘Repulsive’.

My companions Plaice looked like it had been bitten by a Shark!. It was also over cooked.

When asked if we wanted dessert or coffee we decided to pass and left the restaurant as hungry as we went in.

Instead we had pancakes at Miles Cafe Culture – a genuinely buzzy and quality establishment.

Our visit to Harveys was on a Saturday at lunchtime, only two other tables were occupied, so for ambience we had some background music and a baby crying in the corner. We were also a bit surprised that the fish slab was not  in use, to let us see what fresh fish was on offer.

We passed by again in the evening, on the way to Age & Sons, and noticed that the restaurant was barely half full. Which was interesting when compared to the completely full Age & Sons, which attracts exactly the type of clientel that Harveys are trying to target.

How the AA could award Harveys with “The only AA Rosette in Thanet” is beyond me. There are more deserving restaurants in Thanet, such as Age & Sons. It was also disconcerting to read the description of Harveys in toptable, it used words like “steller seafood” and intimated that Celebrity Chef John Burton Race was involved in the cooking. I am pretty sure he is not.

After two visits now, our conclusion was that Harveys would be an ideal candidate for another Celebrity Chefs TV show – Ramsay’s Kitchen Nightmares.

It’s great that so much money has been invested in Ramsgate, which does really need a good fish restaurant. We just don’t feel the investment has  been made in the kitchen where it really counts. It’s also good to know we are not alone in our views, as I have spotted a couple of reviews now that use words like “Dire” to describe the food in Harveys. So unless there are some major changes here, Harveys can relax as we won’t be reviewing them again.

UPDATE – November 2009 : Just read Jay Rayners recent review for the Observer, spot on. He was also brave enough to try the Oysters!

UPDATE – July 2010 : See picture below, this is amazing. It looks like they are actually using the negative review in The Observer to market the restaurant. 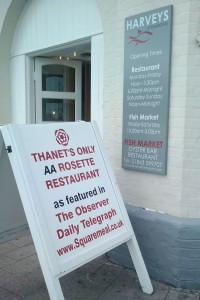 Had my last meal at my favourite London restaurant the Foliage with Chris Staines as Head Chef. Chris was in the last week of his 3 months notice before he moves onto pastures new. Heston Blumenthal will open up his first London restaurant in its place in the Mandarin Oriental in a  years time.

What amazed me was that even in his last week Chris was producing simply breathtakingly stunning dishes…Respect.

Over the years I’ve  had some fantastic meals at the Foliage. In fact I use it as a benchmark to judge every other restaurant I visit. The service there is exceptional and the way Chris uses flavour and texture is the mark of a true artist. I suspect that the much larger replacement restaurant in the Mandarin Oriental will not live up to the high standard set by Chris or indeed Heston at the Fat Duck.

So many celebrity chefs are going down the “franchise” route, with disastrous results. The Abode chain (Micheal Caines) being a prime example and don’t get me started on how awful Harveys is (John Burton Race).

I’d like to thank Chris and his team at the Foliage for giving us many memorable meals (It was my experience of eating at the Foliage that got me interested in food) and to wish him the very best for the future. I just wish he was staying in London as his talent will be sorely missed.

UPDATE : Chris Staines is now Head Chef at the Allium Brasserie in Bath

Harveys of Ramsgate, part of Kent Inns of Distinction, is marketed as a dedicated seafood restaurant  using locally landed fish. A fabulous idea, in theory.

Celebrity TV chef John Burton-Race of the Michelin-starred New Angel in Dartmouth is connected with it, loosely I hope, based on the standards achieved here, both in terms off food and service.

I can not see this place, surviving  the winter. I certainly will not be returning or recommending this unjustifiably overpriced venue. Neither the food quality or the level of service matched the look of the venue. Bland Fish, and one of the worst deserts I have ever had (hard meringue!). Plates passed across my companion at the table, come on – anywhere that typically charges £20 for mains, needs to deliver something a bit special. Then there is the ambience issue,  sitting next to a large noisy table of 10 in a half empty restaurant is far from ideal. This is most definitely not my idea of “fine dining”.

They could have done so much more in this prime location overlooking Ramsgate Royal Harbour. 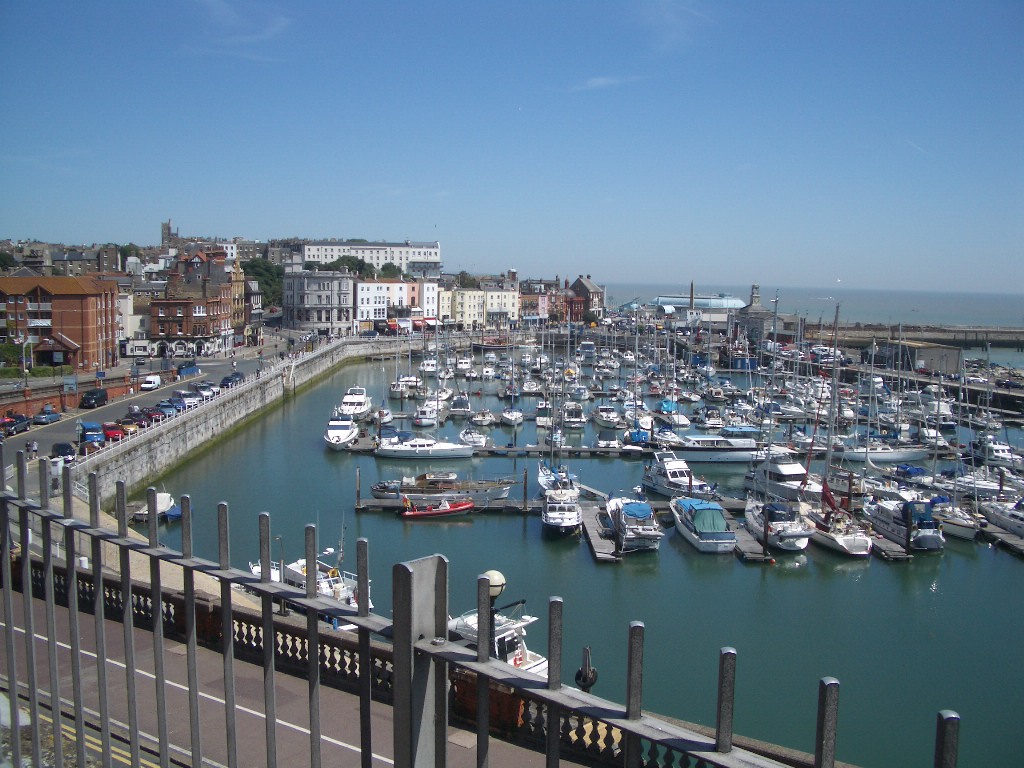 UPDATE October 2009 : Made a return visit to Harveys after all, in light of comments and the award of an AA Rosette. For details see Harveys Fish Market, Oyster Bar & Restaurant – still not the plaice to go!.