The Menier Chocolate Factory,  (so named because the building is a former chocolate factory), just does not make enough of its name.  The building incorporates a gallery, a small theatre, a bar and a restaurant.  Post theatre we stopped for dessert. There was a limited choice, but at least now they do have a couple of chocolate options and make more of an effort on the presentation.

On the food front the Restaurant has gone down hill over recent years.   The matching of menus to what is on at the theatre does not really work, i.e., a 70’s based play merits 70’s style food.

There are some pluses – they do have an ok selection of inexpensive wines and the staff are friendly.

UPDATE : November 2010. Definately still sliding down that hill, had a dreadful meal pre theatre.  Next theatre trip I must remember that Brindisa is just 2 minutes away.

RSJ is a good pre theatre venue, not just for the Old and New Vic, but also for the Imax.  It is a cosy neighbourhood style restaurant which delivers homely cooking and good wine from the Loire valley.

There is a reasonably priced set menu and a small number of à la carte dishes on offer.   RSJ also provides a range of wines by the glass, chosen to compliment the menu.

I made a return visit to Almeida for a friends birthday celebration (Happy Birthday Chris).  My last visit was during chocolate week, see post:- Almeida – not just for chocoholics

The restaurant is a very popular pre-theatre venue, so it was a bit more difficult on a Saturday night to get a seat in the bar area. The room is fairly large, but perhaps not ideal for big groups, our table was a bit cramped for 8 people.

On the food front the highlight was the charcuterie trolley service, which several of my companions ordered. This is something the Almeida is famous for reviving, it includes home made rillettes, terrines and patés served with homemade pickles and I must say that it provides for a fairly substantial starter. One I wished I had ordered. My venison salad was very nice, but it did not have the wow factor of the trolley service.

For my main course I had the rib eye steak with lovely fluffy pommes pont neuf – certainly the best Jenga chips I have had for a while!

The rest of the menu was fairly classic for this type of venue, it included oysters, duck, beef and suckling pig.

To finish the meal I had a surprisingly light pineapple tarte tartin. This dish takes 20 minutes to prepare as it is created from scratch – its worth the wait.

UPDATE : March 2010 – made a return visit and ordered from the charcuterie trolley; highly recommended.

In celebration of chocolate week, Almeida has joined forces with chocolatier Paul A Young to create a unique three course “chocolate” menu.  Each dish being combined with a complementary chocolate. So basically instead of wine matching, it’s chocolate matching!.

The whole concept of a chocolate menu seemed a bit of a gimmick, so I was pleasantly surprised just how serious this food was.

The meal began well with a very nice goats cheese appetizer/canapé.  Then I had a stunning foie gras dish (described as pan fried foie gras, chocolate and orange – 64% Dominican Republic chocolate with a balance of sweetness and a delicate nutty, smoky taste.) I thought this dish was very subtle with great flavour combinations.

For my next course I went with the pork (braised suckling pig, creamed savoy – with Paul A Young’s Ras el hanout spiced chocolate), again it was a dish that was beautifully complimented by the almost savory chocolate sauce.  We even asked the waiter for the recipe and to his credit he went out of his way to get it for us.

One of my chocoholic companions decided to forgo the main course and have two desserts instead. No problem, they just provided him with a “jumbo” sized dessert as the main course. For the rest of us, there was a choice between two desserts. A chocolate souffle that was not so well received and a stunning dessert called Chocolate 3 ways, which included some lovely fudge.

On the wine front to match the chocolate theme, we went for a rather nice Portuguese red.

The only low mark here related to the wine service where the waitress kept overfilling glasses, which meant that the wine was not evenly distributed and forced us to get a second bottle to make up the short fall. (We would have gone for a second bottle anyway, but would have preferred to do it in our own time).

We then finished the meal with coffee and petits fours.

The layout  is very well designed with a distinct bar area and a dinning area that consists almost entirely of round tables. I love round tables in a restaurant, they work so well for both groups of two (both dinners can face into the room) and groups of 6 (much more sociable as you can have cross table conversations with everyone). The acoustics were also very good, we could not hear anything from the neighbouring tables.

The bar is worth a visit on it’s own, we mainly indulged in yummy Chocolate Martinis, but there are some other cocktails on the menu that are worth trying. One of the champagne cocktails, “The Morgan” (Morgan’s Spiced rum, gomme syrup, cranberry juice and champagne) was very nice too.

The restaurant has 2 AA Rosettes, which it certainly merits. It is also off course an ideal pre-theatre venue for the Almeida Theatre. I certainly plan to return, even without Chocolate week.

You will find the Mint Leaf just off Haymarket in Piccadilly, it’s an ideal pre-theatre location. 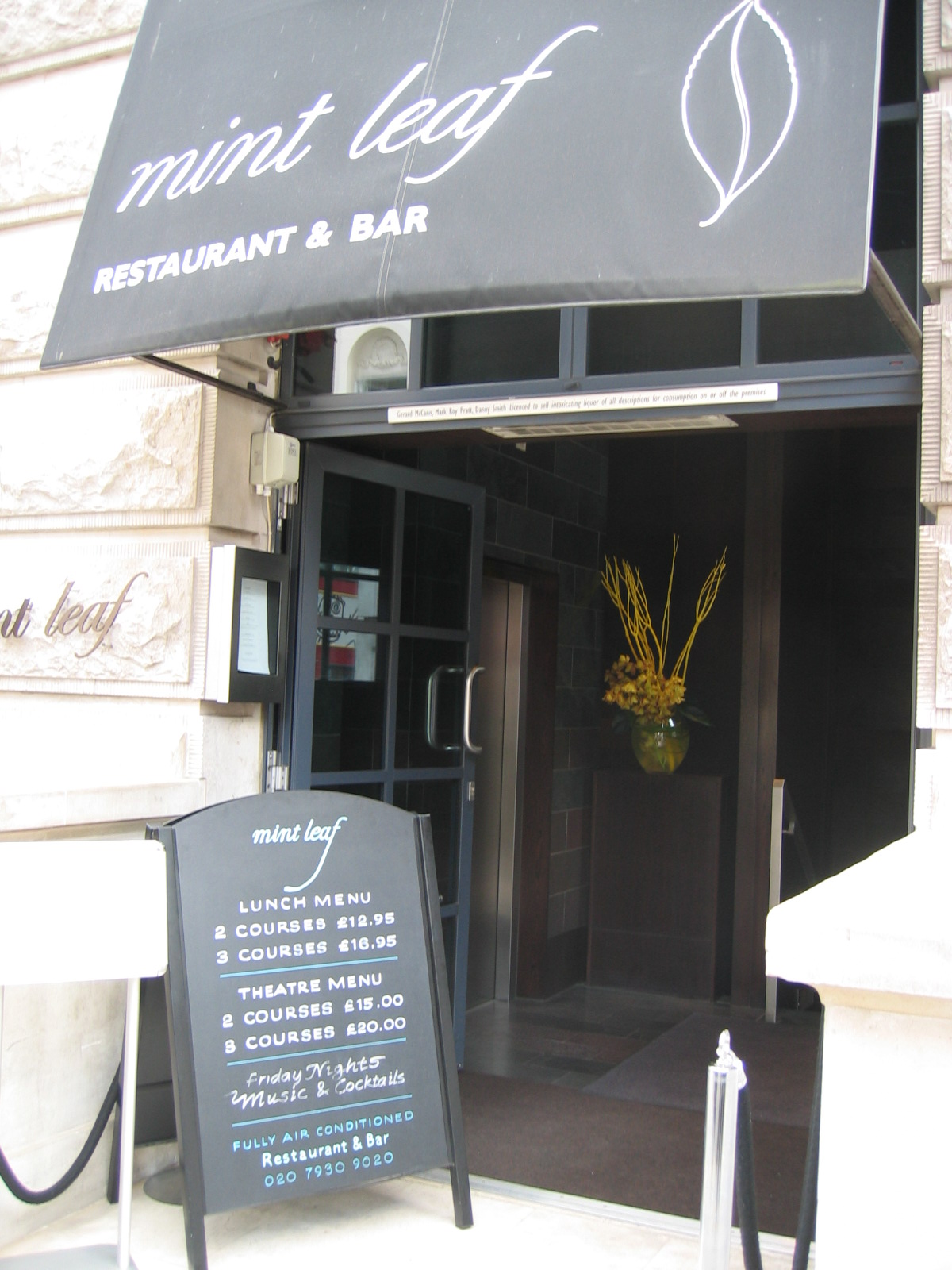 The entrance is a bit off putting, but once you get in, there is a smart bar and very “Modern Indian” Restaurant. The food is off a high standard and designed for sharing. I would recommend you order maybe 6 or 7 of the smaller dishes to share between 2. This being subject to appetite and wallet!. This approach can get expensive, so I would look out for one of the toptable deals that offer  a 50% discount, they come up quite often for the Mint Leaf.  Some nice wines too – no discount on them unfortunately.

There is also what I can only describe as a Cat Walk in the main dinning room, so I guess you could “pose” here too.  The restaurant has 1 AA Rosette, which it certainly merits.

Dockmasters House looks very out of place now in the Docklands, surrounded by warehouse style buildings and opposite a multiplex cinema. It is such a stunning building, both inside and out. The modern Indian food is top notch,  they do a pre theatre menu that is ideal if you want to splash out on something a bit special before hitting West India Quay Cineworld, which  is now my cinema of choice for several reasons:-

3 – central London cinemas do not have Dockmasters House next door.

Marks out of 10 for Dockmasters House