Had my last meal at my favourite London restaurant the Foliage with Chris Staines as Head Chef. Chris was in the last week of his 3 months notice before he moves onto pastures new. Heston Blumenthal will open up his first London restaurant in its place in the Mandarin Oriental in a  years time.

What amazed me was that even in his last week Chris was producing simply breathtakingly stunning dishes…Respect.

Over the years I’ve  had some fantastic meals at the Foliage. In fact I use it as a benchmark to judge every other restaurant I visit. The service there is exceptional and the way Chris uses flavour and texture is the mark of a true artist. I suspect that the much larger replacement restaurant in the Mandarin Oriental will not live up to the high standard set by Chris or indeed Heston at the Fat Duck.

So many celebrity chefs are going down the “franchise” route, with disastrous results. The Abode chain (Micheal Caines) being a prime example and don’t get me started on how awful Harveys is (John Burton Race).

I’d like to thank Chris and his team at the Foliage for giving us many memorable meals (It was my experience of eating at the Foliage that got me interested in food) and to wish him the very best for the future. I just wish he was staying in London as his talent will be sorely missed.

UPDATE : Chris Staines is now Head Chef at the Allium Brasserie in Bath

Before I visited Abode in Canterbury, I had read a  review by a well known food critic which I thought was a bit harsh, this is after all one of Michael Caines projects.  Boy was I wrong, if anything he was being too kind! 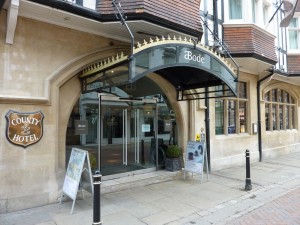 When we arrived we were left waiting for what seemed an age as there was no staff in the dining room. Not a good start.

The food when it arrived was totally underwhelming, some of it was just downright unpleasant.  One desert tasted like play doh© and another tasted like cigarette ash.

The kitchen also recently came under criticism from other sources, see Caterersearch.

The service was in general chaotic. What was particularly hard to swallow was that they charged London Michelin star prices. You would get better value taking the train to London than eating here. Sadly another “Faux Gourmet” experience to chalk up.

Abode apparently merits 2 AA Rosettes – the definition for this is “Innovation, greater technical skill and more consistency and judgement in combining and balancing ingredients are all needed at this level.”

On leaving our opinion was that the only talent there was the busker playing outside.