There are a couple of interesting breakfast venues in Westminster, both are tourist attractions in their own way. The first and most well known is The Regency Cafe, recently seen on BBC 2 in Michel Roux’s Service, and the other is The Riverside Cafe on Lambeth Pier. The little hut that houses that cafe has made a few TV appearances too, mainly in the  background when a great view of Parliament is required, last spotted in Doctor Who – Rise of the Cybermen.

This is well worth a visit for the atmosphere alone, it’s just full of character. You will most likely need to queue for service, alongside the local workmen, businessmen and tourists, but the small team that man this place are very efficient and the queue moves quickly. The place in a strange way was reminiscent of Inopia in Barcelona, especially when the orders are called out by the women with the amazing voice (a tourist attraction in its own right!).

We had the Full English breakfast with Hash Browns and Black Pudding as extras.  Not a healthy breakfast option that’s for sure.  This place is often described as a Greasy Spoon Cafe, but the breakfast was far from greasy, the eggs were very tidily presented on the plate, the bacon and sausage though were a little heavy on the salt for my taste. I could almost feel a coronary coming on. I liked the way they sold Orange Juice in a milk bottle, might go for that next time along with the Eggs Benedict they were advertising – less dangerous to my circulation! 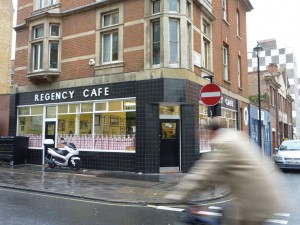 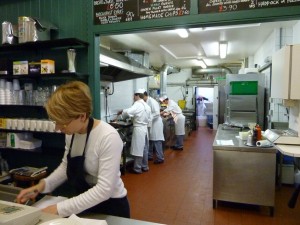 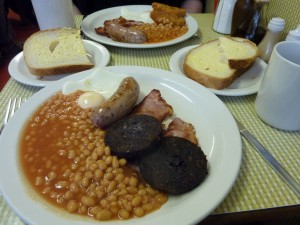 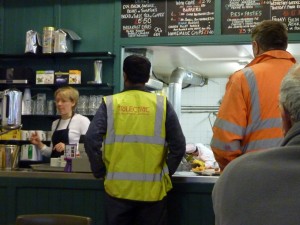 This is under new management, and they have given the old hut an effective make over with new flooring and seating, a central table and other nice touches like the modern mirror and flower displays. There is not a huge amount of space, about 10 seats inside and maybe a bit more outside. It attracts the tourists due to its location I am sure, but the staff are also friendly and helpful. They seem not to mind being asked for directions or information on the river boat trips.  This is a much more relaxing/quieter venue than The Regency Cafe. I accidently dropped my coat on the floor and the staff quickly picked it up for me, which was a nice touch, in most venues of this type it would go unnoticed.

Here we ordered an Omelette with Chips and a Full English breakfast (which came with Hash Browns,  Bacon, Sausage, Mushrooms, Tomatoes, Beans and 2 slices of Toast – it was a big breakfast). Coffee was extra.  The cost of breakfast here is more expensive than The Regency.  I have to admit though that  I enjoyed this one more. 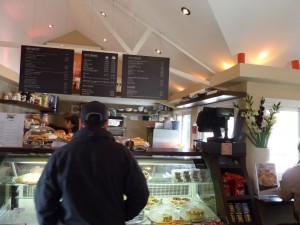 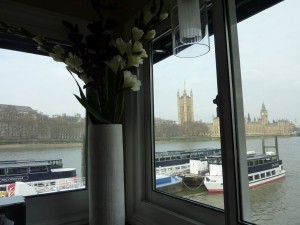 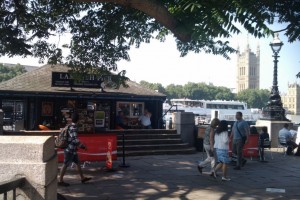 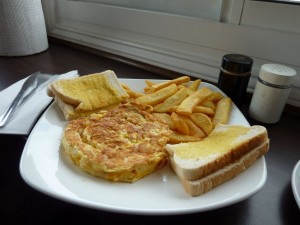 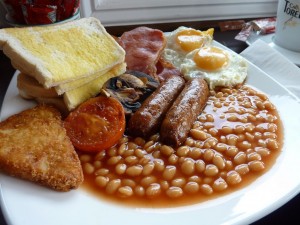 Zucca has a very reasonable £10 corkage fee when you bring your own bottle.  Corkage fees can be excessive. Here is a useful list, to give you a rough idea of the typical charges:-

It’s not as good a deal as the one advertized by the Kitchen W8 (free corkage on a Sunday evening), but for a Saturday night a £10 corkage fee is not too bad.  Especially in a restaurant with such a great reputation for food.

So armed with a rather nice bottle of Amerone (Masi Costasera Classico Amerone 2003), we headed off to Zucca (Bermonsey’s answer to The River Cafe), to choose some cucina povera to go with it.

It is almost a year now since my last visit, shortly after the Restaurant opened, and to say Zucca has been successful in that intervening period would be something of an understatement. It’s had rave reviews, is buzzing most nights and is firmly recognised as a “Foodies” destination restaurant.

The highlights for me had to be the pasta dishes.  The beautiful fennel and lemon flavoured tagliatelle was so refreshing and the veal and parmesan ravioli was delicious  – why did I just order a starter size portion!  The pasta was just in a different class from the very ordinary and much more expensive pasta dish I had at Apsleys. The Brunet and Speck (goats cheese wrapped in ham) was also very good.

The only downside to bringing your own wine without knowing the menu in advance,  is that you are a bit restricted in your food choices.  We avoided the more interesting fish dishes which would not have worked with the Amerone and ordered the slow cooked pork in milk and the veal chop instead.  One thing that had not changed since my last visit was the limited selection of side orders.  My veal chop, lovely though it was,  would have really suited me better if accompanied by some potatoes rather that the spinach I barely touched.

We finished with the cheese course and a very nice piece of light and moist orange cake.

The service is not particularly polished. The staff were all very pleasant, but  not quite attentive enough to comfortably handle the two hour turn around on the table. That and our waitress must have missed watching Michel Roux’s Service 😉 pouring as she did a full measure of wine, rather that just enough to check that the wine was OK, something that is especially important in BYOB situations.

Zucca is not perfect, but they certainly know how to cook.

After dinner we headed down to Most Cafe bar under Tower bridge, it was busy and getting served at the overcrowded bar looked impossible (why do under staffed bars insist on doing cocktails?), so instead we made our way to the more laid back Draft House Pub. Instant friendly service and a free table. It has a good reputation for its food as well, so definitely worth a return visit to try that, see Cheese and Biscuits review for details.

Marks out of 10 for Zucca