The Evening Standard and Time Out reviewers really rated Zucca, a new Italian in Bermondsey – see Review of the Reviews

We tried it for Sunday lunch.

It is a modern take on a good Italian Trattoria, in that it is informal and makes no attempt to “tart up” the presentation of the dishes. Which are made from fresh ingredients and beautifully cooked.

For starters I had the Zucca Friters (Pumpkin in batter) and my companion had the Speck (juniper flavored ham) and Pigeon Crostini, both very nice but we had to make use of the olive oil provided with the bread to enhance them. Some pesto or a dip of some sort would have been ideal with my Friters.

There was small selection of  main courses, basically meat/fish with some greens, so if you want pasta you need to order as a separate course.  I ordered Pigeon, it was superb, tasty and moist – actually better than the Pigeon I had in Cibrèo in Florence which is a real compliment.

I would have liked to have tried the Amaretto tart for dessert but they had ran out, so we made do with some home made ice cream.

The wine list included several options by the glass and a range of reasonably priced bottles.

The marketing for Alfies a near neighbour to Zucca, describes Alfies as “a significant addition to Bermondsey’s burgeoning foodie scene”.  That description did not fit Alfies, but does most definately describe Zucca. 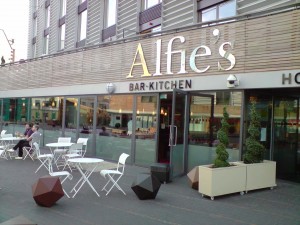 Alfies at the Bermondsey Square Hotel is not cheap, we went shortly after it opened when they were doing an introductory 50% discount, even with the discount I felt completely ripped off.

For starters I had asparagus with egg (expecting a nice runny egg to dip the asparagus in – got a hard boiled egg and some horrid mushroom sauce).  Then it just got worse, more of the disgusting gravy with my next course, it wasn’t the mushroom sauce but something rather close in taste and consistency.

We ordered a bottle of Chablis for about £26, and like the food it was decidedly inferior, basically I can only describe it as plonk.

This place is way below the standards of the other restaurants in the area.  How it can be described as “a significant addition to Bermondsey’s burgeoning foodie scene”  or as “a place that champions fresh English dishes” is a joke.  I rather wonder if the people who wrote this “advertising copy” actually ate there!

UPDATE December 2010 – Alfie’s now have a new chef;  not sure I can bring myself to go back though.

UPDATE April 2012 – Have yet to read a positive review of the restaurant (Greggs Table).

UPDATE September 2012 – The Hotel and restaurant are currently being used for the reality show Hotel GB – have to say that the place seems to be more about PR than food.