The Roca brothers 1 Star Michelin restaurant Moo is in the Hotel Omm. It is ideal for people with jaded palettes, as Moo is all about “sensations”.

We went for the gourmet tasting menu at 85 euros with 25 euros for matching wines.  We started with a visually stunning dish called the “golden egg” – an egg yolk in a gold caramelized shell served with what tasted like crushed cornflakes – the epitome of breakfast.  The next dish conjured up the sensation of being in a forest, this was delivered by the pigeon carpaccio with juniper ice-cream presented in a smoke filled glass cloche which when removed gave of a strong woody aroma.   After the “forest” we moved into the “orchard” – that sensation came in the form of a snow crab ravolli in a citrus sauce.

We finished on a high with the dessert, which brought back memories of being at the “Fun Fair” –  Candyfloss, toffee apples and nuts.  They used actual candyfloss (something we also had at Moo’s sister restaurant El cellar de Can Roca ) along with a beautiful “fake apple” –  a caramelized shell containing mousse. This was a really impressive dish.

The Americans at the next table were doing the usual thing of trying to get the food done their way, a real No No here. The Maitre’d handled it well, but when the food is effectively an art form you just don’t mess with it. It’s like telling Picasso to use less blue.

The dining  room is very artistic (let down only by the NCP carpark style wall, that we have mentioned in earlier posts). The plates used to present the food were unusual perhaps even unique – they included one signed by chef Ferran Adrià of El Bulli.

We returned to the Hotel Omm a few days later to eat in Moovida, where the menu is a lot more down to earth.

This is pretty much our first stop after getting off the plane in Barcelona.  Moovida is the bar of the Hotel Omm, so its menu covers bar food, but that description just does not do it justice, as the quality is unmistakable. We started with a stunning veal sandwich (actually more of a burger than a sandwich), then added in a cheese course to extend the meal and finished off with a delicious apple tart with ginger ice cream.

UPDATE:  May 2010 – Revisited Moovida, we had exactly the same meal. There was no dip in the quality. The menu is more extensive, but when you find something you enjoy it’s hard not to do repeats.

The S.Pellegrino World’s Best Restaurants list rates El Celler De Can Roca as number 5, not that the place is bad, far from it. It is just that I haven’t been to all the best restaurants in the world yet, and this one already is not in my top 5.  Actually I should have know better than trust this list, as last year I visited number 11 L’Astrance in Paris, again not bad – but not really worth in my view the acolades it receives. Plus this year Restaurant Gordon Ramsay – Royal Hospital Road in Chelsea did not even make the top 100, and that is most definately in my top 10.

El Celler De Can Roca is out in the suburbs of Girona, so about 1 hour on the train from Barcelona, then a 10-15 minute taxi ride.  It is a very stylish venue, and they had some nice touches, the one I especially approved off, was the complimentary Cava and water (not that we did not really pay for it in the bill – as El Celler De Can Roca is not cheap). This is a much nicer approach than staff pushing you to buy a glass of overpriced Champagne before your meal (one of my pet hates).

An easier alternative in the Roca Brothers empire, is to just stay in Barcelona and go to their restaurant at Hotel Omm , Moo.

Moo is the 1 star Michelin restaurant (part of the Roca brothers empire) situated in the Hotel Omm in Barcelona, (part of the Grupo Tragaluz).

It is very fashionable, very much a place to be seen. Normally in this sort of venue the food disappoints, but here for once  the food is actually good enough to match the atmosphere. Advanced booking is essential.

Moovida is the informal bar/dinning area. This venue is an especially useful recommendation as you can normally do a walk in.  Its also a great place for food and people watching (unless you are facing the wall that might as well be an NCP car park. Etiquette apparently dictates that the woman sits looking into the room, getting the interesting view. While the man has to stare at a wall. I’ve lost count of the number of tables I’ve sat at looking at a fire exit sign…rant over).

Short video showing Hotel Omm, finishes with some images of that wall in Moovida:-

Cuines Santa Caterina is housed in the Mercat Santa Caterina , it is great for an informal lunch. You can not book, so get there as soon as you can after it opens at 1:00 to guarantee getting a seat. 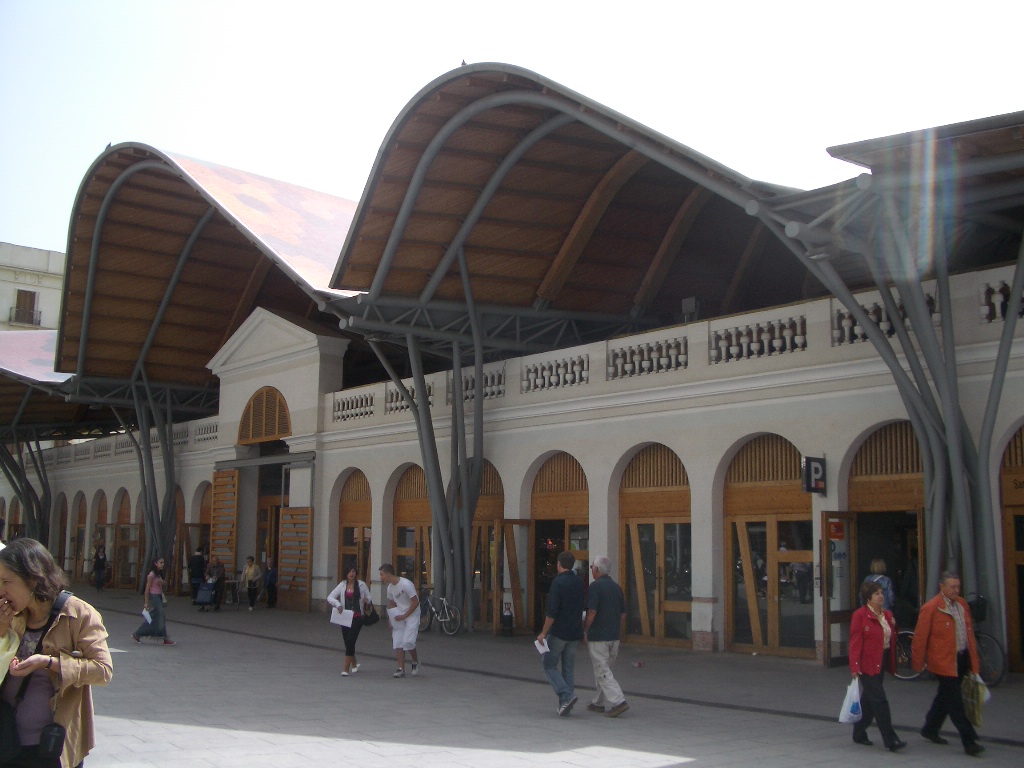 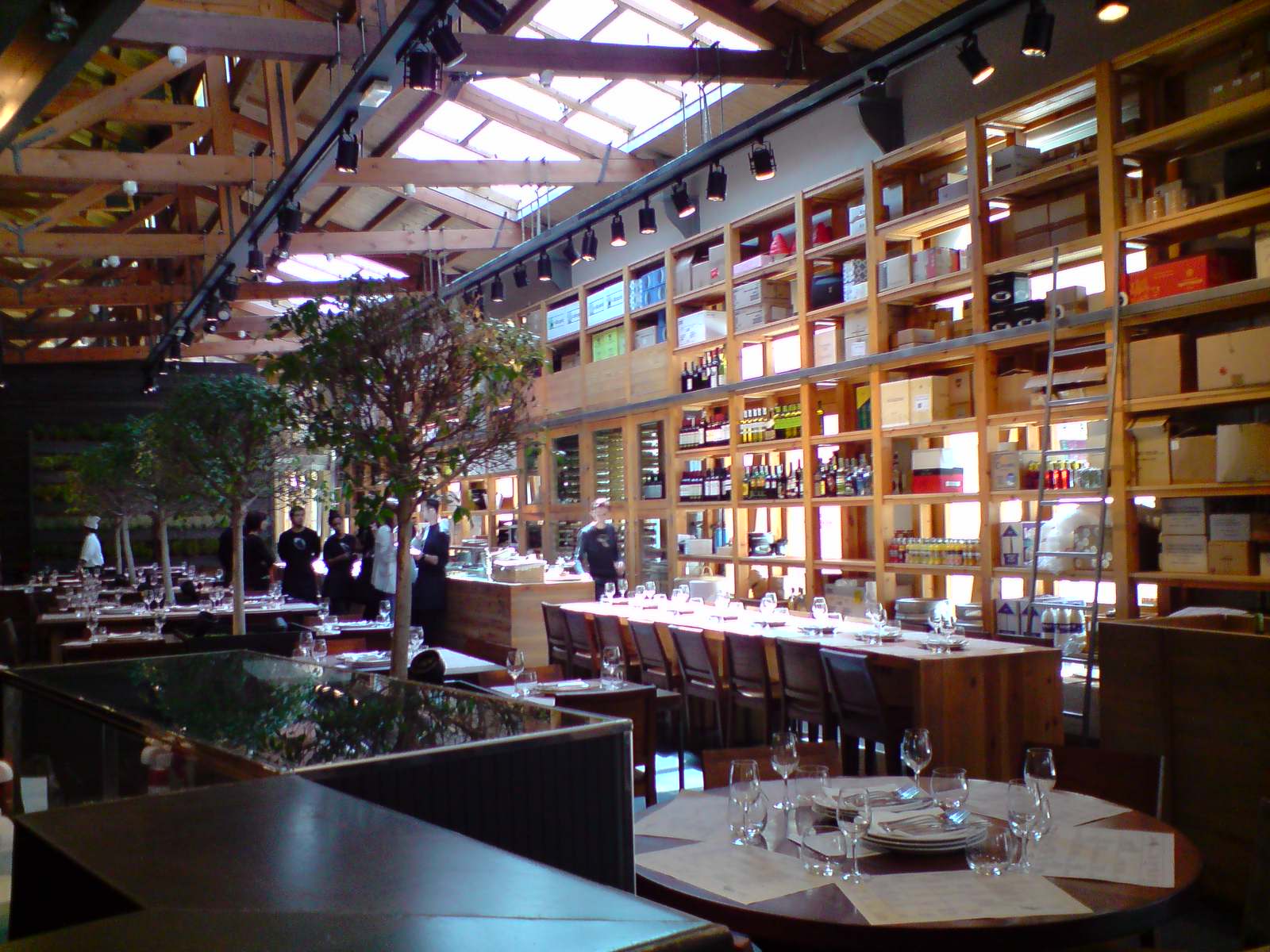 They have an English version of their menu, which is worth asking for as the menu layout is a bit odd. 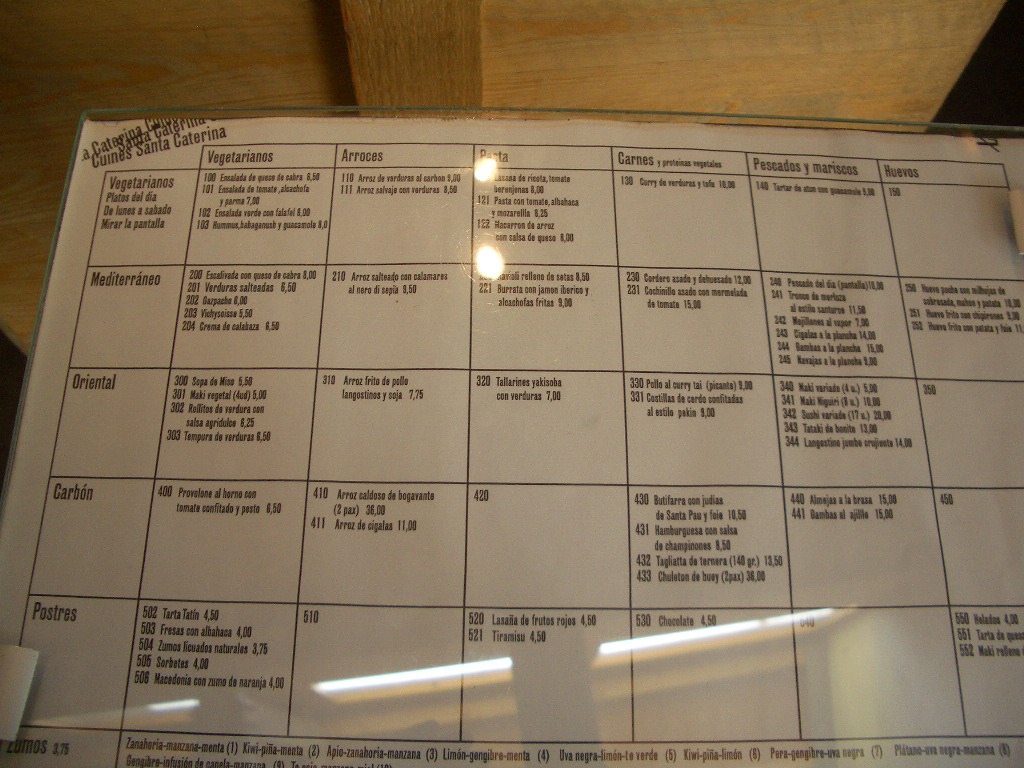 It is probably a bit more expensive than a lot of the lunch options in Barcelona, but it’s all about quality and they deliver on that with fresh market ingredients.

It is part of the Grupo Tragaluz who really know the restaurant business. The other restaurants in the group are always good standbys, and their flag ship Michelin stared restaurant Moo in the Hotel Omm is well worth a visit, for both food and people watching.